The other evening we decided to make pizza. We made the dough, the sauce, treated ourselves to the second cheapest mozzarella in Morrison’s, and had a blast putting it all together (with the help of a rather nice bottle of pinot). When we were rolling out the bases, I found myself talking about the last time I made pizza, “well, when I was about four or five actually.” I remembered it quite vividly because my mum had let us all make our own little individual pizzas. With four loud children in a small kitchen, the project was inevitably mayhem, but it was special. Almost two decades later my siblings and I still laugh about the way I somehow managed to cause half of my dough to lift up in the oven at a right angle, forever dubbing the final product “the sofa pizza”. It was an unexplained phenomenon that went down in family history. And I seem to remember it tasted pretty good too.

My mum had apron strings, and I had hold of them from a young age. I mean this literally, of course. As soon as I could climb onto a chair and see over the counter, I was getting stuck in. Of course this wasn’t all the time – kids can be an absolute pain in the kitchen, I’ve been assured – but if there was a chance to get us involved, my mum would take it. As I became older the enthusiasm sometimes waned (the TV taking a slightly higher priority in my teen years), but two essential things continued building me up to my own culinary future. 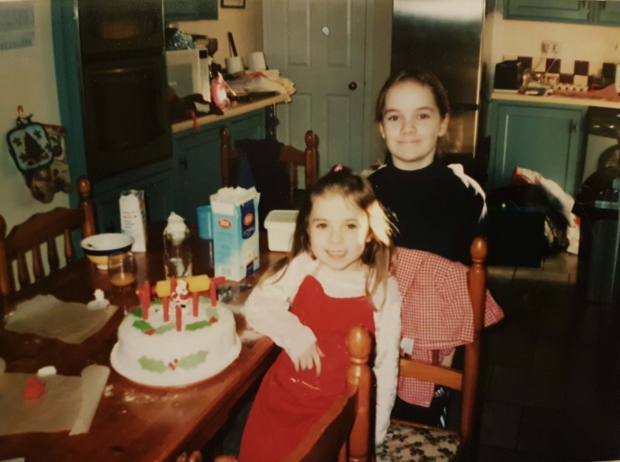 The first was my positive relationship with cooking: because my mum was encouraging and patient, I only ever had fun in the kitchen. It meant that whilst I knew cooking wasn’t always easy (I’d seen her flap around in a frantic effort to bring every element of a Sunday roast into perfect harmony), I had also seen the creativity and the rewards it could bring. The sense of achievement a child will have when they create something tasty with their own hands is a priceless experience. Even if this only happened once in a while, at Christmas or on a rainy day, each time the feeling stuck with me.

The second was my habit of hovering (often annoyingly I’m sure) near my mother as she prepared dinner. I would natter away about my day, all the while soaking up all sorts of useful bits and bobs about cooking and baking. Sometimes I would pause my story to ask her, say, why a pie needed a chimney, and sometimes she would offer up information she thought might be useful, telling me to “remember this for when you have to feed yourself one day”. A lot of the time, however, I was learning without even realising it. Just being there was enough.

When I finally did start to feed myself at uni I became obsessed. The speed at which I learnt new things was addictive, and before long those phone calls home asking which gas mark I needed for banana bread were few and far between. My childhood had given me a grounding, and now that I was in charge there was so much fun to be had.

When it comes to learning to cook, I was really lucky. I had a mum who, regardless of tradition, loved to feed her family and had the time to do so; I had apron strings to guide me. I even had an apron of my own – one that was replaced each time I grew too big for it. But – and this is another realisation I had at university – not everyone had this luxury. Some people arrive in their first student kitchen in search of skills that I took for granted. The best thing about cooking, though, is that it’s never too late to start. A little bit of time and enthusiasm, and maybe a friend or relative to pass on some wisdom, is all you need to get that ball rolling. I’m convinced that if people give themselves the chance to create something tasty with their very own hands, they’ll get addicted to that feeling too.